Skip to content (Press Enter)
HomeOffsite exhibitionsMega Mingiedi at the Museum Joanneum of Graz and at the Kunsthalle of Tubingen, Germany. 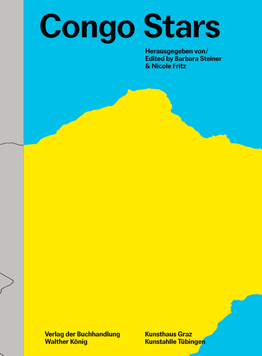 In this framework, a diptych created by Mega Mingiedi is loaned by Gervanne and Matthias Collection.

“Congo Stars” exhibition showcases contemporary Congolese artists most representative of the national landscape from the 1960s. Split into six themes (exploitation, mythology/spirituality, bar, public stars/heroes, market/streets/urban space), the exhibition takes as a guide the chronology of important events in the history of the DRC (Democratic Republic of Congo).

Mega Mingiedi is a very committed artist in his society. He is an active member of the collective Eza-POSSIBLES Kinshasa, a group of artists whose objective is to make contemporary art closer to the reality and daily life of Kinshasa.

His work focuses on urban space and the place of citizens in the city. It is therefore natural that his works integrate the chapter “STREET” of the exhibition.

Mobutu (2018) is a diptych he describes as focusing on the reign of dictator Mobutu Sese Seko (1965-1997). According to Mingiedi, this is the only political figure who would have had the opportunity to change the situation for the Congo. Unfortunately, his own pharaonic and ill project adapted to the needs of the country, turned against him. For this reason, according to the artist, he can be considered as a figure who has greatly contributed to the crisis that is now reducing the DRC to chaos and ruin.

His work “Kabila mzee” (2018) deals with the former Congolese head of state, Laurent-Désiré Kabila. “Mzee” literally the Old Man, the Sage, is considered as a “national hero” in Congo. This section of the diptych is about the mystery of the end of his reign.  This process that led to it begins well ahead with the legacy left by Europeans but also African predecessors. The artist thinks that it is by getting interested in this inheritance that one will be able to reach the truth and overcome the confusion of the contradictory versions concerning the assassination of Kabila father.

All artists presented in this exhibition: